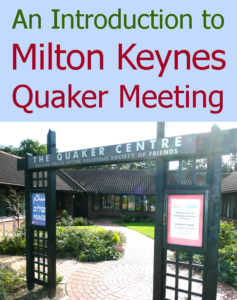 This leaflet will provide you with some initial information about the Quaker Meeting in Milton Keynes. The Meeting has steadily grown since its beginnings in 1972. Years ago, there were Quaker Meetings in Newport Pagnell and Woburn Sands but these had ceased to function by 1960. Quakers are a small group nationally numbering only around 18,000 in Britain. Although the origins of Quakerism are British, most Quakers today are to be found in America and Africa. Worldwide there are some 340,000 of us. 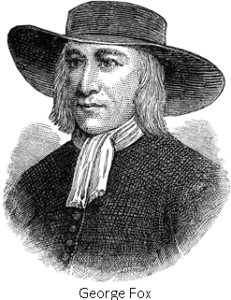 Quakerism dates from the 17th Century. Its founder, George Fox, was inspired to believe that there is something of God in everyone and that anyone can communicate with the God within if they are open to  the leadings of the ‘inner teacher’. Following the example of Jesus, Fox believed that true religion is ‘inward’ and not ‘outward. This accounts for the fact that we worship in plain, domestic-style buildings and that we have no religious symbols and make no use of religious rituals. The early Quakers met largely in silence, and thought of worship as waiting and listening for the leadings of the Spirit . We still think of  Worship in this way, leaving it to individual Quakers to interpret words like ‘spirit’ and God’ in their own way.

Our practices and beliefs

Quakers come together for what we call a ‘Meeting for Worship’. Our main Meeting for Worship is held on a Sunday but we also hold a midweek Meeting for Worship on the  first and third Wednesdays of each month. The Meeting begins when the first Quaker sits down in the Meeting Room. On the table in the centre are copies of The Bible and Quaker Faith and Practice (a collection of Quaker spiritual writings combined with guidance on Quaker processes). In Milton Keynes , we also have a collection of spiritual writings of other faiths on the table. These books are for those in the meeting to consult should they wish to. Our worship is based in silence. No one leads the  worship—anyone may speak (or ‘minister’) during the meeting if they feel moved to do so. We have no priests—a consequence    of Fox’s belief that everyone could access the Spirit directly and equally. However, each Meeting is upheld by one of the  elders who closes it with a handshake at the appropriate time. Elders are a group of experienced Quakers who have responsibility  for the spiritual life of the Meeting. They are appointed to serve for a period of three years at a time.

Whilst Quakers are Christian in origin, they place emphasis on the 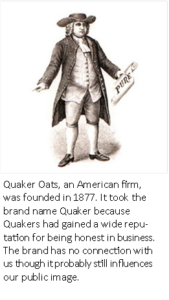 ‘experience’ of religious faith rather than strict doctrines or creeds and today there are many Quakers who draw inspiration and spiritual nurture from the teachings of other faiths besides Christianity,, particularly Buddhism.  Others would describe themselves as ‘non-theistic’ (i.e. without a belief in God as a being). What unites Quakers is a shared way of worshipping and ‘centring down’ to listen to the leadings of the Spirit.  Many Quakers would describe themselves as spiritual seekers.

What we call ourselves

The early Quakers called themselves ‘Friends of Truth’ which in time became The Religious Society of Friends’.  However, they were mocked by a judge  as Quakers in the early days, probably because they shook and quivered during the intensity of their worship. We also often refer to ourselves as ‘Friends’.  Neither of these names is particularly helpful – they contain few clues as to what we are and it’s probably true to say that many people think of us as a strange, old-fashioned slightly secretive sect. The reality is that Quakerism in Britain is liberal, progressive and open to all who share our values and wish to join in silent worship with us.

Quakers share a strong belief that faith should be expressed in action. Over the years we have developed a set of core values , deriving from the 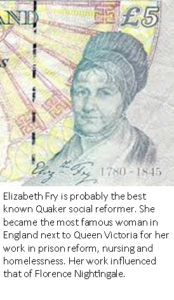 teachings of Jesus, that we unite around. These are peace, equality,  simplicity, truth and, more recently, environmental concerns. One of our key ‘advices’ encourages us to:

‘Take heed, dear Friends, to the promptings of love and truth in your hearts. Trust them as the leadings of God whose Light shows us our darkness and brings us new life.’

Quakers have  long been involved in social reform. In particular, they have worked in areas such as penal reform, mental health, the abolition of slavery, housing, overseas aid, and enlightened employment practices. We also have a strong commitment to peace. Though many Quakers have been conscientious objectors in times of war,  this commitment also includes peace-building and Friends are often to be found working for peace in conflict zones around the world.  Having said that, it is important to state that by no means all Quakers today are absolute pacifists, as many people believe.  Today, members of Milton Keynes Meeting are individually involved in a wide range of social actions. As a Meeting, we have joined Citizens:MK to campaign for social justice in Milton Keynes and we support our local Food Bank.

We have no full-time leaders, so specific roles are undertaken on a 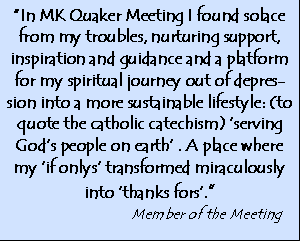 voluntary and rotating basis by individuals and committees normally serving for periods of three years at a time. The day-to-day running of the Meeting is done through committees which have responsibility for matters such as finance, property, outreach, children and so on.  Pastoral care and support is provided by a committee of overseers. Each overseer has a number of members or attenders who they look out for. If someone would like some support from the meeting, it is their overseer whom they will approach in the first instance.

Besides this, of course, a great deal of mutual care takes place informally amongst members of the meeting. We hold business meetings once a month after Meeting for Worship on the first Sunday of each month which are led by a clerk who is

appointed by the membership.  (Clerks are the central point of reference for the Meeting.) Everyone is welcome to attend our business meetings, though non-members (known as ’attenders’) should speak to the clerk in advance of the meeting.

Children in our Meeting

We very much welcome parents with children into our Quaker meeting. 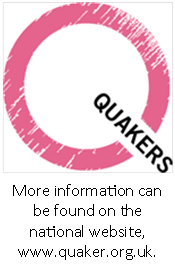 On Sundays, at the beginning of Meeting for Worship, we all gather together and, after about ten minutes, the children depart for classes of their own, led by volunteers. The classes introduce children to basic Quaker and Christian teachings, look at other faiths, explore spirituality  at an age-appropriate level or just have fun together. We also link with other Quaker meetings in the area to provide youth activities for pre-teens and teenagers. All of our volunteers have been DBS checked. The meeting has a strict policy regarding  the safeguarding of children and vulnerable adults. Regrettably, numbers of children associated with the meeting are low at the moment but If you would like to know more about what happens in children’s classes, you could ask the clerk or speak to a member of the children’s committee.

Financially, the Meeting runs on donations from members and attenders, supplemented by income from the letting of the building to community groups and some commercial organisations. Our building is owned and maintained by the Area Meeting to which we subscribe and we also make an annual donation to support centrally organised work. Most Friends donate directly to the meeting by bank transfer but cash donations are possible through a collecting box placed near the door of the main meeting room. Three times a year we hold additional special collections for various forms of Quaker work and regularly hold fund-raising events for selected charities.

which together form an ‘Area Meeting’. We join up with eight other meetings, from Bedford and Leighton Buzzard in the north to Watford and St Albans in the south, to form what is known as’ Luton and Leighton Area Meeting’. Together all the Area Meetings in Great Britain form what we call ‘Britain Yearly Meeting’.  As the name suggests, this meets once a year and is the ultimate decision making body of the organisation. There are over 400 Quaker meetings in Britain.

More than a Meeting for Worship

There are many activities generated by Milton Keynes Friends to which everyone  is invited.  To help attenders learn more, there are monthly ‘Enquirers’ sessions after Meeting on the last Sunday of the month. Also, the elders group arranges regular study groups, plus an annual weekend ‘retreat’ for the purpose of deepening our spirituality. 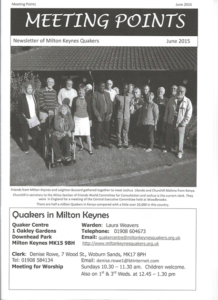 We have three book groups which meet regularly, mostly on a monthly basis. These are the Bible book group, the ‘ordinary’ book group, reading novels and non-fiction books, and an ‘alternative’ book group which discusses the spiritual writings of all major faiths. There is also a regular craft group meeting weekly on a Tuesday afternoon. Times of meetings for all events are announced in the notices after meeting and also in the newsletter which comes out every three months.  ’Meeting Points’, our newsletter, is an important source of information about who we are and what we do—it contains reports of events, information, personal reflections of individual Friends and a calendar of forthcoming events. Free copies are distributed on publication and an electronic version is available to download from our website (www.miltonkeynesquakers.org.uk). 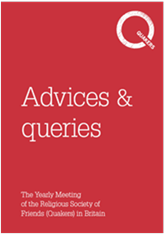 Never be afraid to ask questions about Quakerism—it’s not particularly easy to understand given our silent meetings and reluctance to lecture or preach. We have a well-stocked library from which you are welcome to borrow any book that takes your eye; simply record your loan in the book and return it within a reasonable period. A range of free literature is also available including copies of Advices and Queries , a guide to everyday Quaker living—a number of which are in the Library. Please help yourself. Any member of the library committee will be pleased to help.

Our main reference book as Quakers is known as Quaker Faith and Practice , copies of which are also in the library. This is an invaluable

collection of Quaker writings going back to the earliest days, with quotations from George Fox and other early Quakers right up to the present day. This is not a ‘sacred text’ in the sense that it sets out what Quaker have to believe but it expresses and reflects the Quaker experience over the centuries. Importantly, it is revised every twenty-five years or so to reflect contemporary concerns and provide guidance on issues Friends are experiencing in the modern world. Copies of  Quaker Faith and Practice  can be purchased from the bookshop at Friends House in London, along with a wide range of other Quaker publications. These can be viewed and ordered online by going to www.quaker.org.uk/shop. 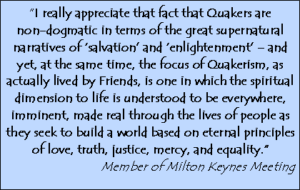